What makes wind energy so special

Wind power is one of the most elegant and simple ways to produce energy. The never ending wind drives the rotor blades of a wind turbine to turn around. The kinetic energy of the rotation is used to power a generator which is producing electricity.

The visible parts of a wind turbine are the blades, hub, nacelle and tower. The main operating components are situated inside the nacelle and include drivetrain, gearbox and generator among others. The blades are made out of laminated materials such as composites, balsa wood, carbon fibre and fibreglass. The tower typically consists of three to four tubular steel sections with a concrete basement to prevent the turbine from falling. The nacelle and blades are mobile and turn around so as to face the hub always towards the direction where the wind is coming from.

In the 80s, wind turbines did not exceed the height of 50 meters and the blades had a diameter of around 20 meters. At present, hub heights as well as turbine rotors often measure more than 100 meters. And new technologies are still beating height records regularly. Why is there an ongoing trend towards larger turbines? The bigger the diameter of the blade, the more wind can be captured and therewith energy. By doubling the blade’s length, four times more energy can be generated. It works similarly with height. Usually, the higher - the more wind. If, for example, wind at higher levels blows double as fast, electricity generation will be augmented by more than four times. In a nutshell, small changes in size lead to big changes in energy production.

The power output of a wind park depends mainly on the number and capacity of the turbines installed and the wind speed through the rotor. The Wind Farm Ayitepa will have a total power generating capacity of 225 MW. There will be up to 75 turbines, each with a capacity ranging from 3.0 to 4.5 MW. Energy calculations for the Wind Farm Ayitepa show that the wind farm will supply between 600 - 700 Gigawatt hours per year. This amount of electricity meets the needs of more than 150,000 Ghanaian households (assuming 10 people per household and an electricity consumption of 400 kWh per capita and year).

Facts and figures of this section originate from the Global Wind Energy Council (GWEC).

A tiny bit of history

Since ancient times, wind power was used by humans, for example for natural ventilation in buildings or already 5,500 years ago for sailing with boats. The Greeks constructed wind-driven machines and windmills, which were used as early as in the 7th century after Christ. The first wind turbine to power electricity was built in 1887 in Scotland. However, wind power got overrun by cheap fossil fuel electricity production and it took nearly a century until it became finally economically viable. In the seventies of the last century, when oil got more expensive and air pollution a matter of concern, the renewable resource wind relived again. At last, a remarkable wind boom started in the 90s, when also awareness about air pollution and climate changes rose. 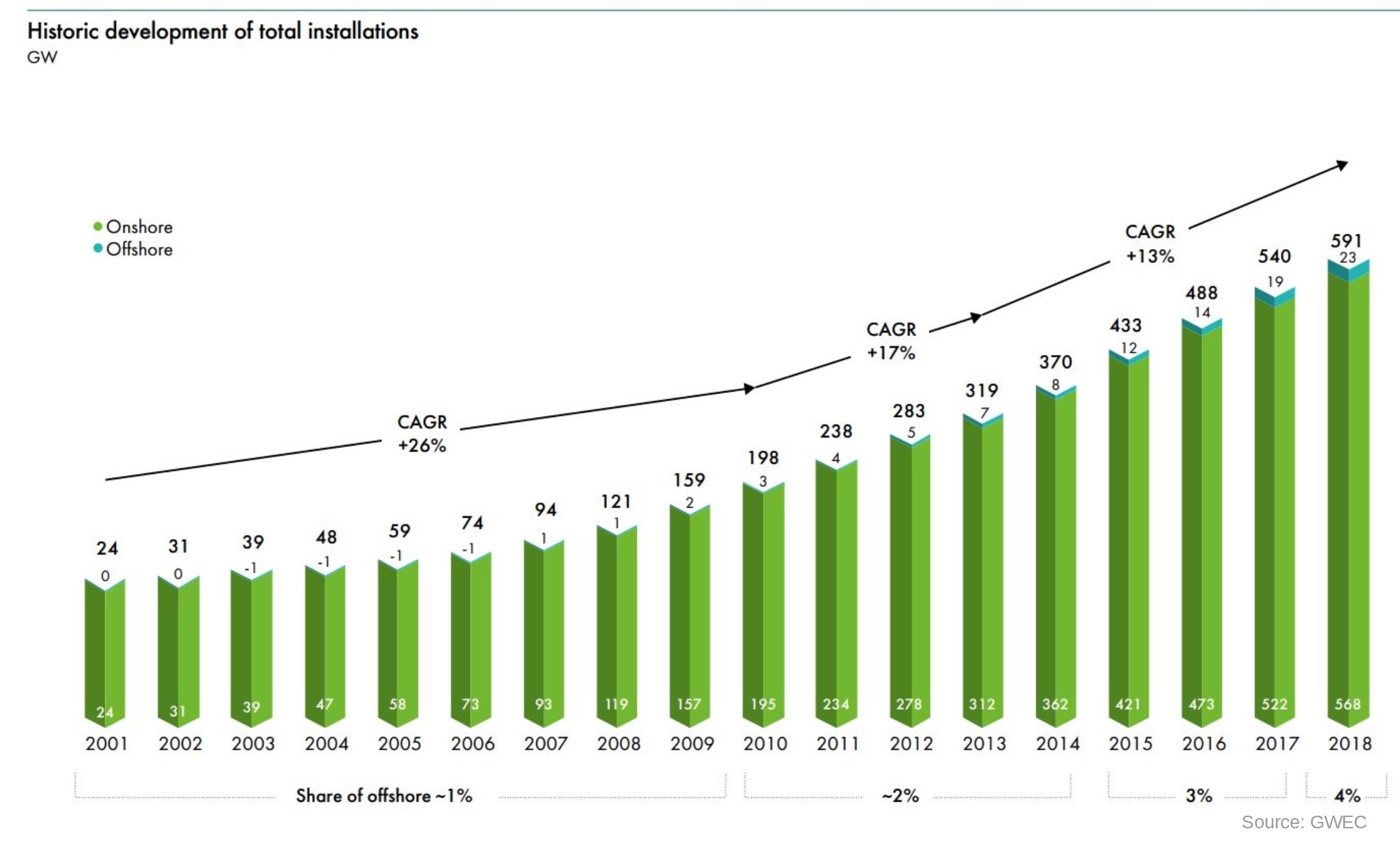 Worldwide, the installed capacity of wind power per year is continuously increasing. Over the last ten years, an average annual growth rate of approx. 15% was recorded. This boom strengthened during the last years with the installation of huge wind capacities worldwide. With regard to technology and performance, this resulted in a great leap forward. Nowadays, wind power is one of the cheapest energies on the market. There is no other technology with similar growth rates as wind, and its share of the global energy mix is increasing steadily.

Africa waiting in the wings

Compared to Europe and Asia, the growth in Africa is lagging behind. However, 2014 and 2015 were milestones for Africa as for the first time, more than 1 GW of new capacity were installed each year. In 2016 and 2017, slightly more than 400 MW of new wind energy capacity were installed in Africa. Major players so far are South Africa, Egypt, Ethiopia, Tunisisa and Morocco. According to experts, Africa is very likely to become a new wind energy hotspot in the upcoming years.

By the end of 2018, there has been 591,549 MW of wind energy produced in about 80 countries worldwide. China, USA, Germany, India, Spain, UK and Canada are the countries in the world with the biggest wind markets. 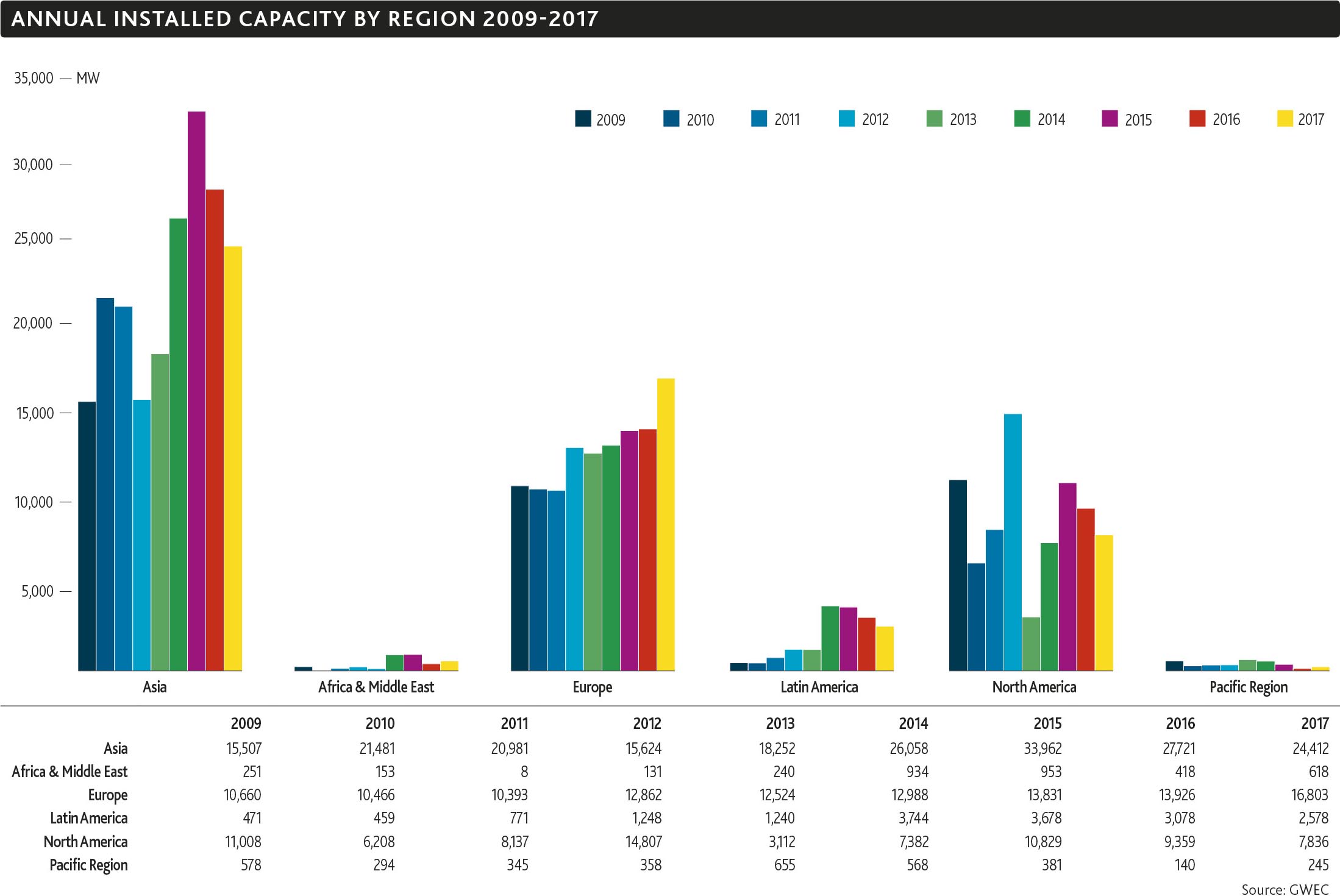 In a world of finite resources, wind energy is a perfect solution. Wind is a free and indigenous fuel. There is no cost to bring it to Ghana, the price never changes and it will never run out. It provides a secure and clean supply of power to Ghana for years to come.

Ghana’s severe electricity lack in the past years was retaining economic growth and impedes the country to enhance its wealth. As one of the biggest wind parks on the African continent, the 225 MW Ayitepa project will improve the power supply in Ghana and make it more reliable and also cheaper. It will be an important stepping stone for getting into renewable energy production and therewith help to overcome “dumsor”, the Ghanaian vogue term for the ongoing electricity crisis. The new Government under Hon. Pres. Akufo-Addo has clearly announced to embrace renewable energy production facilities and entirely move from a dependance on thermal towards renewable energy.

Leaving behind a pure conscience

Fossil fuels like coal, oil and gas provoke climate change and pollute our air with toxic substances. Atomic power devastates land because of uranium mining, comprises a high risk of nuclear contamination during operation and leaves behind radiating waste which will be dangerous for ten thousands of years. In contrast, wind turbines do not produce any harmful or toxic substances during operation. Complying with the EPA guidelines, there are no health dangers and the safety risk is insignificantly small. In addition, compared to fossil fuel and nuclear power plants, wind technology uses almost no water. Once the lifetime of a wind park is over, the turbines can be dismantled and the materials recycled.

And the winners are…

…the communities and the local population. Villages around the project area will not only benefit from better power supply like the rest of Ghana, but also profit from direct improvements. The most important gains are jobs for local people, which will create new possibilities. It is estimated that there will be over 500 jobs created during the phase of construction. During the 25 years of operation and maintenance, more than 50 people will be employed permanently. Apart from this direct employment, there will be a substantial contribution towards the general economic development by creating employment through suppliers.

A further indirect benefit for the communities around the Wind Farm will be the construction of new access roads and the improvement of existing tracks. After construction, these roads can also be used by the public, what will ease the access for the farmers to their fields.

Do you have any questions?